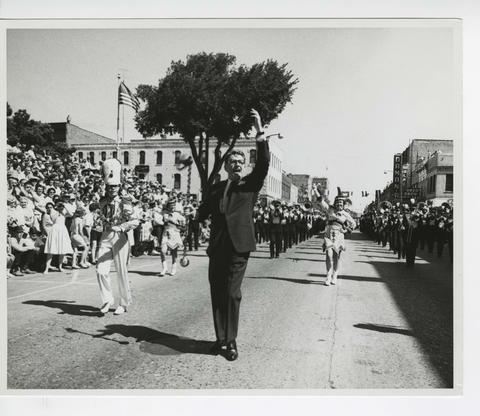 Robert Meredith Willson (May 18, 1902 – June 15, 1984) was born in Mason City, Iowa, to John David and Rosalie Reininger Willson. Although Meredith started out playing the piano, his mother saved enough money to order a flute for him. At the age of 17, after high school graduation, he moved to New York to study the flute at what is now the Julliard School of Music. He performed small gigs as a flautist until hired as first flute with the John Philip Sousa Band. He toured with the Sousa Band from 1921 – 1923. He also worked with New York's Rialto theater orchestra, under the leadership of Hugo Riesenfeld. From 1924 to 1929, he played for the New York Philharmonic Orchestra and the New York Chamber Music Society. Willson joined the Army, serving as a Major in World War II, after which he worked as music director of ABC radio and television networks. He did a radio show called The Maxwell House Show Boat from Hollywood, which was later renamed Good News. He was also involved in the Armed Forces Radio Service for a time.
Willson married three times: first to his high school sweetheart, Elizabeth, whom he married on August 29, 1920 and later divorced; Ralina "Rini" Zarova, whom he married on March 13, 1948 and who died, December 6, 1966; and Rosemary Sullivan, whom he married on February 14, 1968. Meredith Willson died on June 15, 1984, in Santa Monica, California; his wife Rosemary survived him.
In 1924, Meredith Willson published his first piece of music: a composition called “Parade Fantastique.” Willson’s first big musical success was with his smash hit, The Music Man, which premiered December 19, 1957 at the Majestic Theatre on Broadway. It has since had two Broadway revivals, one in 1980 and one in 2000. Willson also contributed scores and librettos to the musicals The Music Man, The Unsinkable Molly Brown, 1491, and Here’s Love. Acting as lyricist and composer for most of his career, Willson wrote memorable standards including “It’s Beginning to Look Like Christmas”, “May the Good Lord Bless and Keep You”, “You and I”, “Two in Love”, “76 Trombones”, “Goodnight, My Someone”, “Till There Was You”, “Trouble”, “My White Knight”, “Lida Rose”, “I Ain’t Down Yet”, “Belly Up to the Bar, Boys”, “The Big Clown Balloons”, “Pine Cones and Holly Berries”, “My Wish”, “Iowa Fight Song”, “I See the Moon”, “Ask Not” and “Symphonic Variations on an American Theme.” He was inducted into the Songwriters Hall of Fame in 1982. In 2020, The Great American Songbook Foundation inducted Willson into the Great American Songbook Hall of Fame.

The Meredith Willson Papers are divided into five series: Personal, Business: Musicals, Business: Other, Meredith’s Music Collection, and Audiovisual Materials. Within each series, items are broken down into alphabetized categories.

Access to and use of some of the materials in this collection is restricted because of the nature of the material. Access is evaluated on a case-by-case basis. For more information, please consult the staff of the Library & Archives.

Some of the materials in this collection are fragile due to age and/or poor physical condition and may be inaccessible. Consult the Library and Archives staff in advance of your visit to ensure access to these materials is available.

Received from The Music Man Foundation, formerly the Meredith and Rosemary Willson Charitable Foundation, on September 5, 2012.

Separated materials: Published materials were removed from the collection and cataloged. They can be found in Worldcat and Libraryworld.