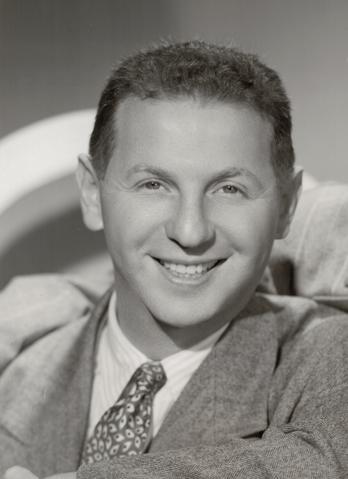 Hy Zaret (August 21, 1907 – July 2, 2007) was born Hyman Harry Zaritsky in New York City to Max and Dora Zaritsky, who emigrated from Russia in the 1890s. Zaret attended public schools, but was not an enthusiastic student. Despite his small stature, he played football at a local community center. He attended West Virginia University and Brooklyn Law School, where he received his LLB. Zaret practiced law for a few years and legally changed his name in 1934. His first major lyrical success came in 1935 when he wrote the words to “Dedicated to You” with Saul Chaplin and Sammy Cahn. He served as a sergeant in the War Music Division during World War II and wrote many war-related tunes, including “Song of the Army Nurse Corps” and “Soldiers of God (The Chaplain’s Song).” He also wrote English lyrics for “The Partisan” and “La Marsellaise.” In 1944, he wrote the lyrics to “One Meat Ball”, which became a success for the Andrews Sisters. Zaret’s biggest hit, “Unchained Melody”, written for the 1955 prison film Unchained, received an Academy Award Nomination for Best Original Song. Recorded by more than 300 artists, the song saw renewed interest in the 1990s with its inclusion in the movie Ghost. In the ensuing years, it received multiple awards from the American Society of Composers, Authors and Publishers (ASCAP), the Songwriter’s Hall of Fame, and Rolling Stone magazine. Beginning in the early 1950’s, Zaret began writing lyrics (usually in conjunction with composer Lou Singer) for children’s educational songs and public service announcements for which he received numerous accolades. His efforts include Ballads for the Age of Science, Little Songs on Big Subjects, Little Songs for Better Schools, Little Songs for Busy Voters, Little Songs for Living Longer, Little Songs on Fire Prevention, Spotlight Ballads, Little Songs for the American Cancer Society, Sing-Along for Mental Health, and others. Zaret’s marriage to Shirley Goidel produced two sons, Thomas (who predeceased him) and Robert. Zaret passed away in 2007 at the age of 99.

Collection is minimally arranged into three series: Manuscripts, Awards, and Audio recordings. Published materials such as recordings and books have been cataloged and may be found in our LibraryWorld catalog (link can be found on homepage).