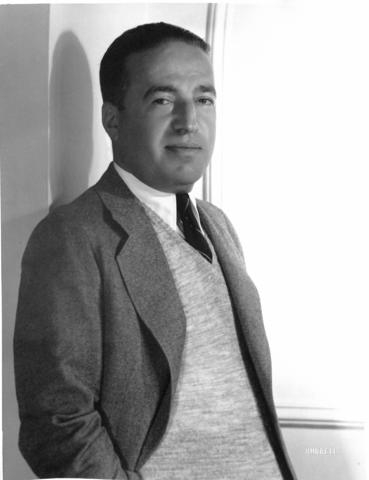 Born in Koblenz, Germany on November 6, 1886, Gustav Gerson Kahn emigrated to America with his family when he was four; the family settled in Chicago in 1892. Gus completed grammar school where he demonstrated an ability to create rhymes and won an essay writing contest. He worked at various jobs including a stint as a pottery wrapper in a china factory while continuing to write lyrics. In 1909, Kahn collaborated with Grace LeBoy, a song composer for music publisher Joseph H. Remick whom he met on New Year’s Eve, 1908. Their collaboration of his lyrics and her melody resulted in Kahn’s first hit “Gee, I Wish I Had a Girl,” and the marriage of Kahn and LeBoy after an 8-year professional relationship. The marriage produced two children, Donald and Irene.

In 1932, Kahn moved his family from Chicago to Hollywood where he worked as a lyricist for MGM and RKO. With Vincent Youmans, Kahn wrote the score for Flying Down to Rio, the cinematic debut of Fred Astaire and Ginger Rogers. Before his untimely death in 1941, Kahn worked on numerous films including The Merry Widow, Naughty Marietta, and Girl of the Golden West. His last hit, “You Stepped Out of a Dream,” appeared in the 1941 movie Ziegfeld Girl.

Kahn worked with and befriended many of the top composers of the period including Walter Donaldson, Richard Whiting, and Harry Warren; his circle of friends also included actors and singers like Eddie Cantor and Al Jolson and bandleaders Guy Lombardo and Isham Jones. An avid golfer, Kahn was known to write lyrics while playing a course with Walter Donaldson. Al Jolson served as godfather to son Donald. Kahn served on the ASCAP Board of Directors from 1927 to 1930 and was admitted to the Songwriter’s Hall of Fame in 1970. His 32-year songwriting career produced approximately 800 published songs, many of which remain standards today.

The collection is divided topically into five series: papers, original compositions, sheet music, photos, and framed documents.
Separated materials: Originally, the collection included materials belonging to Donald Kahn, composer and son of Gus Kahn. These materials were separated and can be found in Mss 044.

The copyright interests in this collection have not been transferred to the Great American Songbook Foundation. Music written prior to 1923 is in the public domain. For more information, please consult the staff of the Library and Archives.

Received from Margaret Kahn, widow of Donald Kahn, on November 18, 2008.